Mpox (monkeypox) disease is a rare disease caused by infection with the Mpox virus.

Mpox (monkeypox) is a notifiable condition1

What is mpox (monkeypox)?

Mpox is a viral infection that causes a rash.

In May 2022, a global outbreak of mpox (monkeypox) began, with cases identified in many countries where the disease is not usually present. The mpox (monkeypox) situation is changing rapidly.

How mpox is spread

Mpox (monkeypox) is a zoonosis (spread to humans from animals). Spread from humans to animals occurs primarily in tropical rainforest areas of Central and West Africa, via contact with animals such as rodents or eating wild game. There is no evidence of spread from animals to humans in Australia.

Mpox (monkeypox) mainly spreads through direct contact with infected body fluids, lesions or scabs on the skin. It can also spread through prolonged contact with respiratory droplets (from coughing, sneezing, breathing and speaking) and contact with contaminated materials or objects, such as contaminated clothing, towels or linen.

This mode of transmission means that anyone can acquire or transmit mpox (monkeypox). The possibility of transmission via various body fluids, including saliva or semen, remains under investigation.

A large proportion of cases in the 2022 outbreak have affected men who have sex with men. People who attend sex on premises venues or other events that involve sexual or intimate contact with a large number of people have been shown to be at higher risk of contracting mpox (monkeypox) .

Signs and symptoms of mpox (monkeypox)

1 to 3 days after the first symptoms occur, the person develops a rash, often beginning on one part of the body before spreading to other parts. The rash can vary from isolated lesions to several thousand lesions and goes through different stages.

The signs and symptoms in the 2022 outbreak have had some differences from the disease found in Central and West Africa including:

Mpox (monkeypox) will usually resolve in a few weeks. Complications from mpox (monkeypox) are more common in the very young, pregnant women and persons with impaired immune systems. 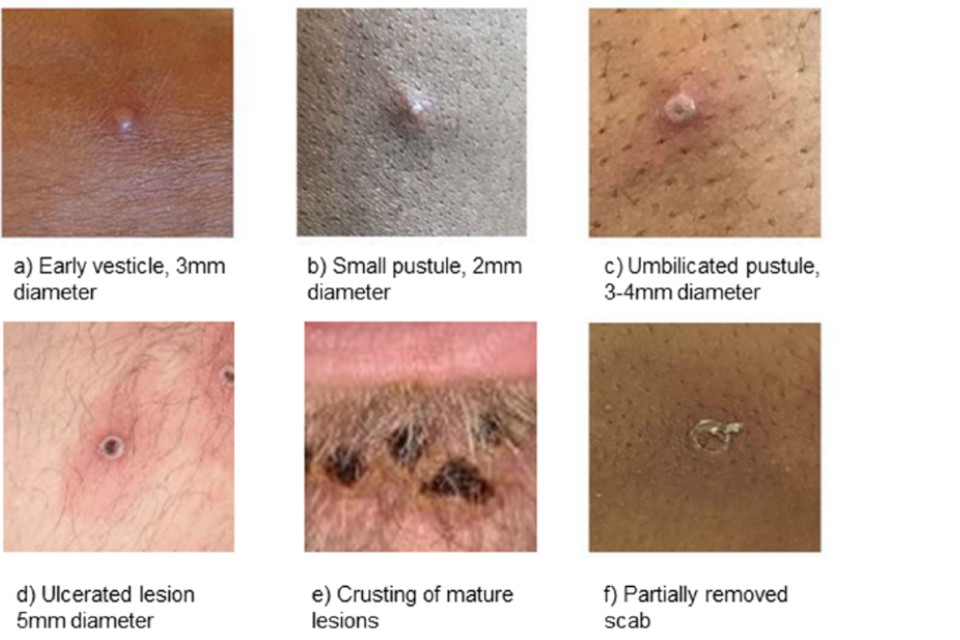 Anyone developing symptoms that may be consistent with mpox (monkeypox) should seek medical care, wearing a mask and calling ahead to make sure they can be isolated away from others.

Where a doctor suspects mpox (monkeypox) based on the person’s symptoms, a swab of the rash will be taken to confirm the diagnosis by laboratory testing.

The person is considered infectious while they have symptoms and until all of the lesions have crusted, dried or fallen off and new skin has grown.

As most cases of mpox (monkeypox) are mild, medical treatment is not usually required. Treatment aims to reduce symptoms. Someone with mild mpox (monkeypox) symptoms may only need simple pain medicines, such as paracetamol, and to stay hydrated.

If an infected person’s symptoms are more severe, they may need supportive management such as intravenous fluids and medicine to control fever or pain.

For people with compromised immune systems at greater risk of serious illness, treatments are currently under investigation.

Infections with mpox (monkeypox) virus can be prevented by the following measures:

Mpox (monkeypox) is vaccine-preventable; however, the supply of vaccines against mpox both globally and in Australia is limited.

The eligibility criteria to receive mpox vaccine in South Australia has been expanded.

People eligible to receive the vaccine include:

More information on mpox vaccine availability and how to book an appointment can be found on the  SHINE SA and Adelaide Sexual Health Centre websites.

SA Health will continue to keep the South Australian community informed as both the epidemiological situation and availability of vaccines for mpox evolve.

Back to Malaria
The following links have visual effect only