Measles - including symptoms, treatment and prevention

Measles is an illness caused by infection with the measles virus.

Measles is a notifiable condition1

How measles is spread

Measles is spread when an infected person talks, breathes, coughs or sneezes tiny particles containing infectious agents into the air. These are called small particle aerosols. Due to their tiny size, small particle aerosols can travel long distances on air currents and remain suspended in the air for minutes to hours. These small particle aerosols may be breathed in by another person. Measles is also spread by contact with hands, tissues and other articles soiled by nose and throat discharges. The virus is very infectious and droplets in the air may infect people entering a room up to 30 minutes after an infected person has left it.

Until the late 1960s almost everyone caught measles during childhood in Australia. As a result almost all people born in Australia before 1966 are immune to measles.

The gradual introduction of measles vaccine since then has resulted in the average age of cases in Australia increasing. Most cases now occur in people aged older than 20 years.

Outbreaks in recent years have followed the introduction of the virus from outside Australia.

Signs and symptoms of measles 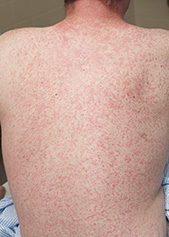 Early in the infection, symptoms may include: 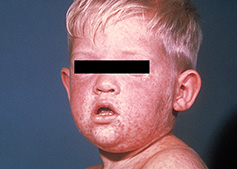 These symptoms usually worsen over 3 to 5 days, then a blotchy rash (see image) begins on the head and over the next day or two spreads down the entire body.

The rash lasts 4 to 7 days. Measles illness usually lasts about 10 days. The cough may be the last symptom to disappear.

Measles is often a severe disease, frequently followed by middle ear infection (7% of cases) or bacterial pneumonia (lung infection or inflammation) in 6% of cases. In as many as 1 in every 1000 cases, brain infection occurs (encephalitis), often resulting in death or permanent brain damage. Sometimes brain damage may not appear until many years later.

Complications from measles are more common and more severe in the chronically ill and in very young children.

The diagnosis is suspected from the clinical presentation and can be confirmed by a blood test, or detection of the virus in urine, throat or eye specimens.

From 24 hours before the onset of symptoms to four days after the appearance of the rash.

There is no specific antiviral treatment for measles. Complications may require antibiotic treatment. Treatment for the symptoms includes plenty of fluids and paracetamol for the fever. Aspirin should not be given to children under 12 years of age unless specifically recommended by a doctor.

Exclude the person with measles from childcare, preschool, school and work for at least 4 days after the onset of the rash.

*A contact is any person who has been close enough to an infected person to be at risk of having acquired the infection from that person.

Almost all people who have 2 doses of a measles-containing vaccine will be protected against measles.

If an unimmunised child aged 6 months of age or older or adult has contact with measles, the infection may be prevented by immediate vaccination (within 72 hours of first contact with an infectious person) with a measles-containing vaccine (unless contraindicated). If it is more than 3 days (73 hours) and within 6 days (144 hours) since the first exposure, immunoglobulin (a solution containing human antibodies that is made from human blood products) may prevent infection.

If the infant is less than 6 months old and is in contact with measles, the risk of developing measles can be reduced by giving immunoglobulin within 6 days (144 hours) of first contact.. The MMR vaccine should then be given as close as possible to 12 months of age, but at least 5 to 6 months after giving immunoglobulin. The measles-mumps-rubella-varicella (MMRV) vaccine due at 18 months of age should still be given at that time.

Adults born during or since 1966 are very likely to be susceptible to measles. Unless they have had a medically confirmed infection with measles they should ensure that they have had 2 documented doses of a measles containing vaccine. This is especially important prior to travel out of Australia.