Lye water (sometimes called ‘Lime Water’) is a strong (caustic) liquid that is safe to use in very small amounts in cooking, but it can be dangerous if lye water is swallowed undiluted straight from the bottle. It can cause severe corrosive burns to the throat, oesophagus and stomach with permanent damage if swallowed. Children who have accidentally swallowed lye water have needed urgent medical attention in hospital.

By law, lye water must meet strict safety requirements if it is sold for household use.

Lye water sold in Australia might be stronger than the cooking ingredient used in Africa and other countries.

Lye water is an ingredient used in Asian and African cooking for cooking meat, rice or noodles and vegetables like corn, beans, maize or okra to soften or add flavour or keep vegetables colour. It is usually added as part of the recipe in small amounts (spoonfuls).

Lye water can also be used in soap making and as a cleaning agent. 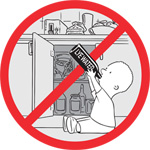 Lye water is a strongly alkaline (caustic) solution which can cause severe injury in the form of corrosive burns, especially to the throat, oesophagus and stomach if swallowed. These injuries can result in hospitalisation and permanent damage in severe cases.

Lye water can be dangerous if:

Salt crystals or powders that do the same job as lye water include:

Translated fact sheets detailing some of this information is available in the following languages: